Newstead Legend of the Month – March 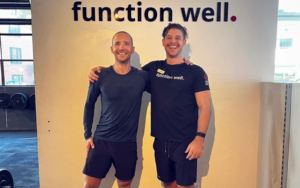 Mathias has been working with me for the most part of the last 12 months and the success I have seen him achieve has been inspiring!

Over the course of 6 months Mathias followed his weekly training schedule without skipping a beat. Completing strength and Conditioning sessions to support his efforts on the bike, in the water and out on his runs each and every week.

Mathias not only completed the triathlon without injury but smashed it under 3 hours with a time of 2:58:33; 2 minutes faster than the goal he had set 6 months prior.

Congratulations on being March’s Legend of the Month!